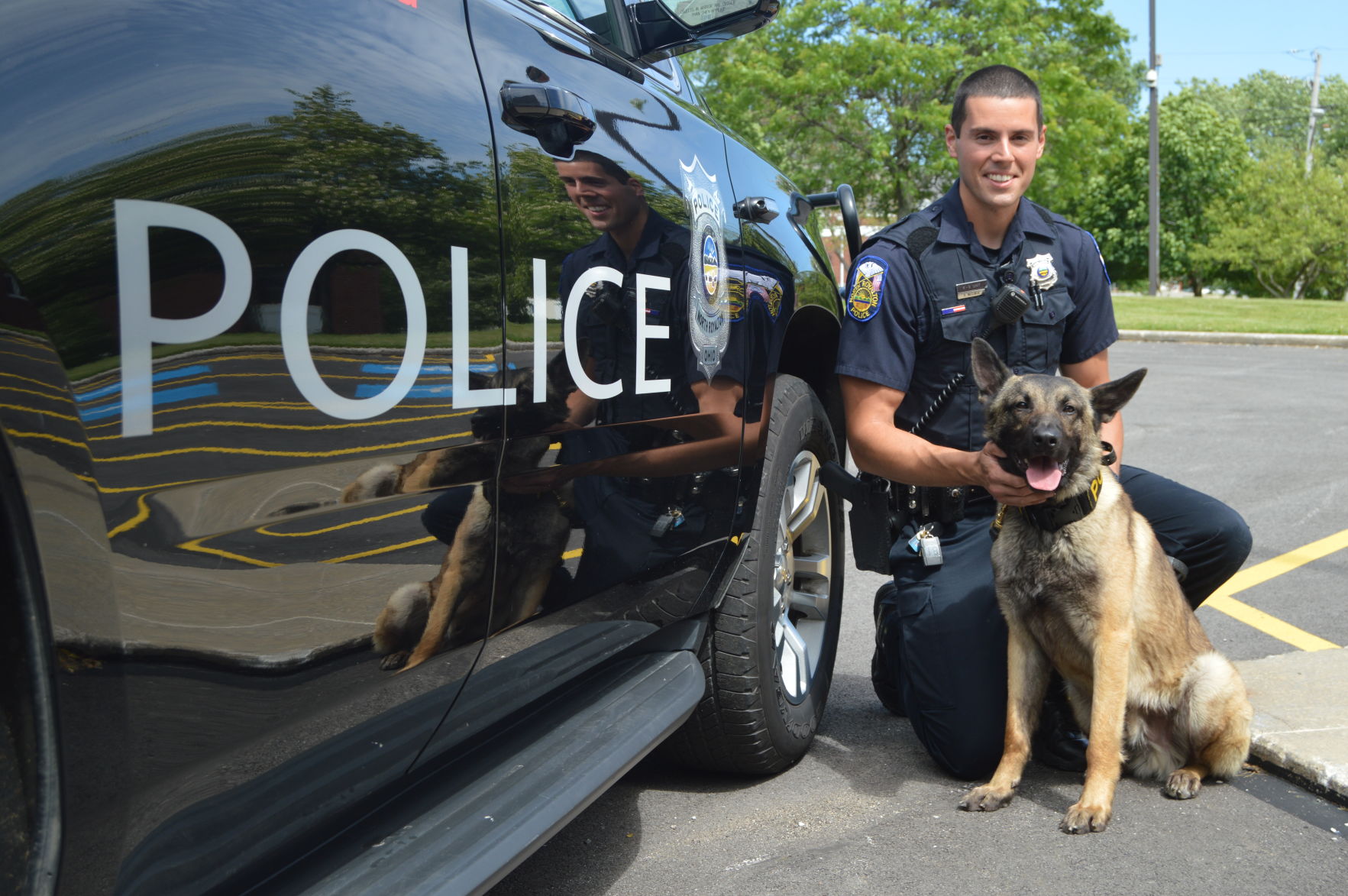 Police Officers Daniel McClintic and Bear make up the newly re-instated K-9 Unit. McClintic is a 2-year veteran of the force. The partners reported for duty together June 14. Photo by JAIME ANTON 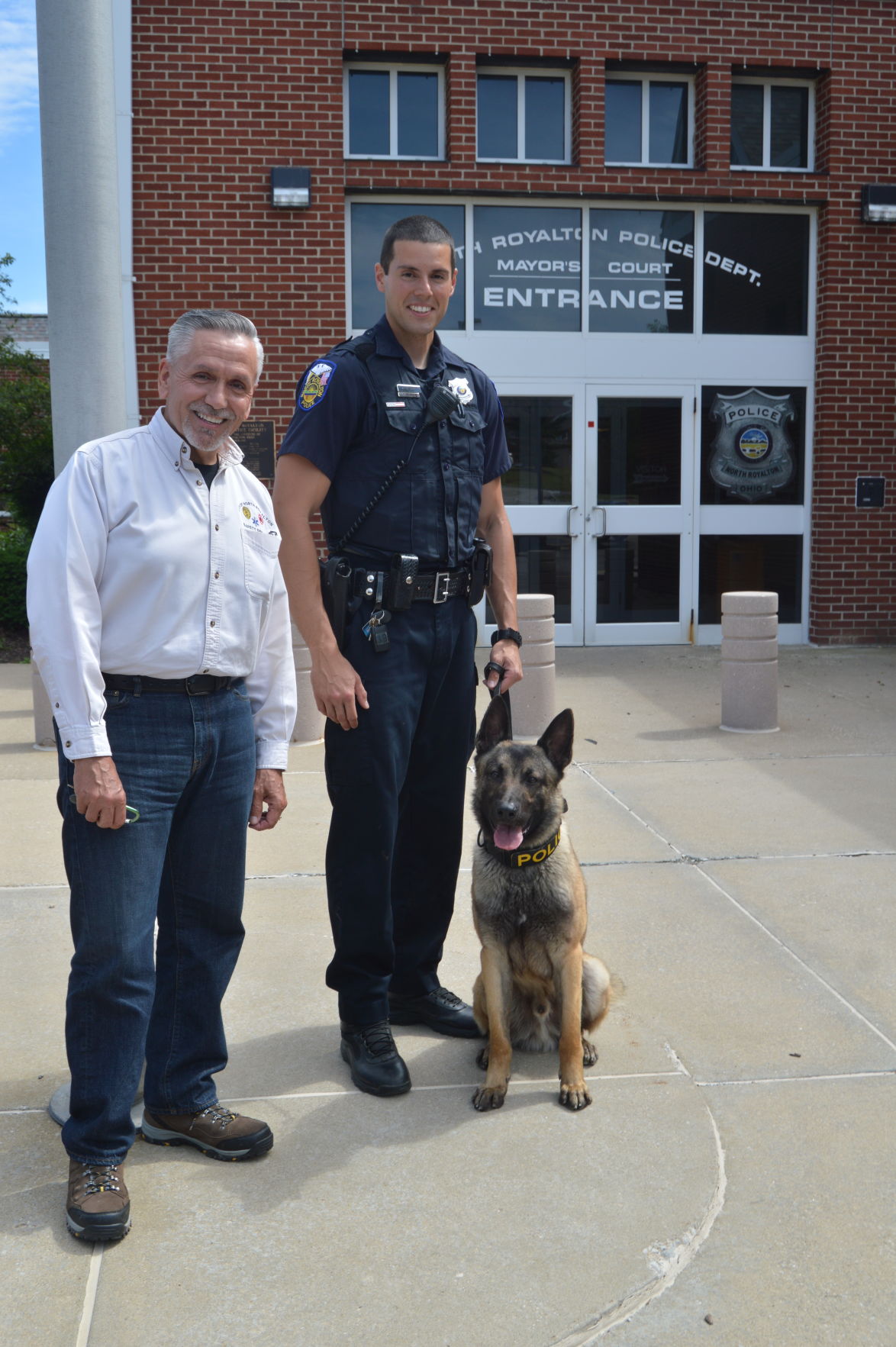 Safety Director Bruce Campbell (left) applied for the grant funding through The Ben Roethlisberger Foundation to resurrect the police department’s K-9 program, fetching $12,800 in funding last year, which covered the cost of the dog, its bulletproof vest and kennels. The city has been without a K-9 unit for 20 years. Photo by JAIME ANTON 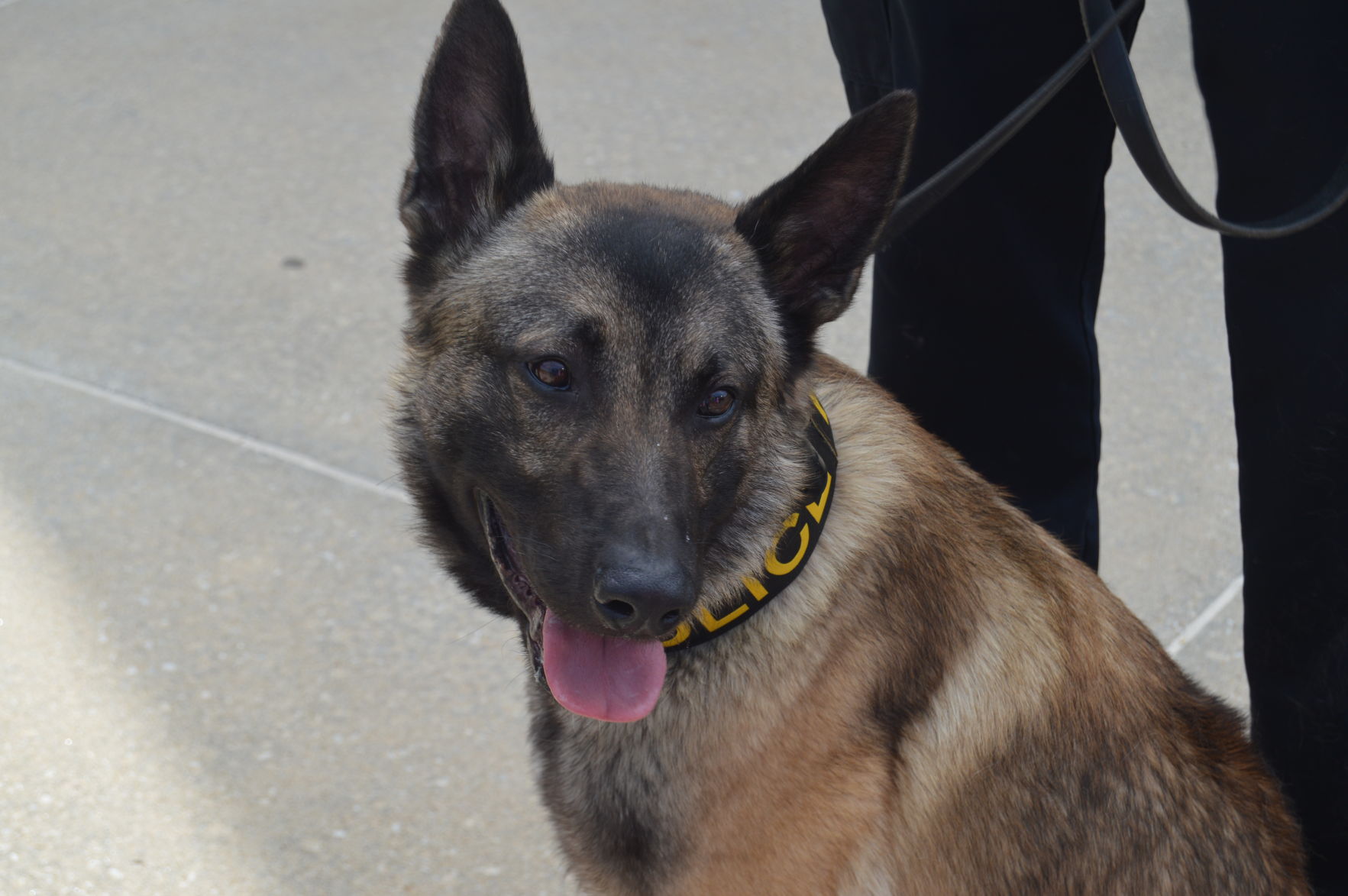 Bear is said to be very friendly and loves attention. Photo by JAIME ANTON
PREVIOUS IMAGE


NORTH ROYALTON – For the newest rookie on the police force, you could say his first day on the job was ‘ruff’.

The new K-9 officer Bear graduated training with flying colors June 12 and reported for his very first day of duty June 14 with his handler, Patrolman Daniel McClintic, a two-year veteran of the force.

As they walked into their first shift together, Bear’s tail was wagging and tongue hanging, making it hard for police station employees to resist greeting the pup with open arms and a good scratch behind the ear. And Bear was soaking it all in.

“He’s very friendly, as you can see, and loves attention,” McClintic said, as Safety Director Bruce Campbell pet Bear. “We will be working basic patrol today, and we’ll see what’s out there.”

McClintic said this day was a long time coming.

While training at Marysville, the two worked eight- to 10-hour days four or five days each week for 12 weeks, learning the ins and outs of K-9 cops.

On the first day of training back in March, Bear, who is just a year old, was basically still just a puppy.

“It’s amazing to think 12 weeks ago he went from not knowing anything at all to being state-certified now,” McClintic said. “And we got lucky. He has a great personality.”

Bear was itchin’ to report for duty, literally.

“We did some training earlier today to burn some of that energy,” McClintic chuckled. “He loves to work. He works for food and toys.”

As the K-9 unit, he is the community’s dog and will work hard as an officer alongside his partner, but McClintic said he makes sure to carve time out each day for Bear to be just an ordinary dog. In fact, you might even find Bear with his paws up, resting on the couch at home watching TV when he’s off duty.

Because he is the community’s dog, residents will have ample time to meet him. He will likely attend the upcoming Pet Carnival, hosted by the North Royalton Animal Hospital, on Sunday, July 28 at the City Green. Dr. Adam Hechko, North Royalton Animal Hospital’s hospital director, will be taking care of much of Bear’s routine check-ups free of charge.

He will work with School Resource Officer Jon Karl to have some sort of presence and relationship at the schools.

“It was a long, rigorous academy, but they passed all the certification with flying colors: narcotics, article search, tracking,” he said. “They have two more weeks in July to learn apprehension. They’ll get done with that July 23. We are proud of both Bear and Officer McClintic. This is an excellent addition to our patrol division.”

Campbell helped apply for the grant that made Bear possible through The Ben Roethlisberger Foundation, which fetched the city $12,800 to cover the cost of the dog, its bulletproof vest and kennels.

Campbell said it is great to finally see Bear in action.

“It’s good to see it all come together. This was a culmination of a lot of hard work by our dog and officer. I’m happy to see him join the ranks,” Campbell said. “The dog we have and the way he has been trained, the people of the community are going to love him.”