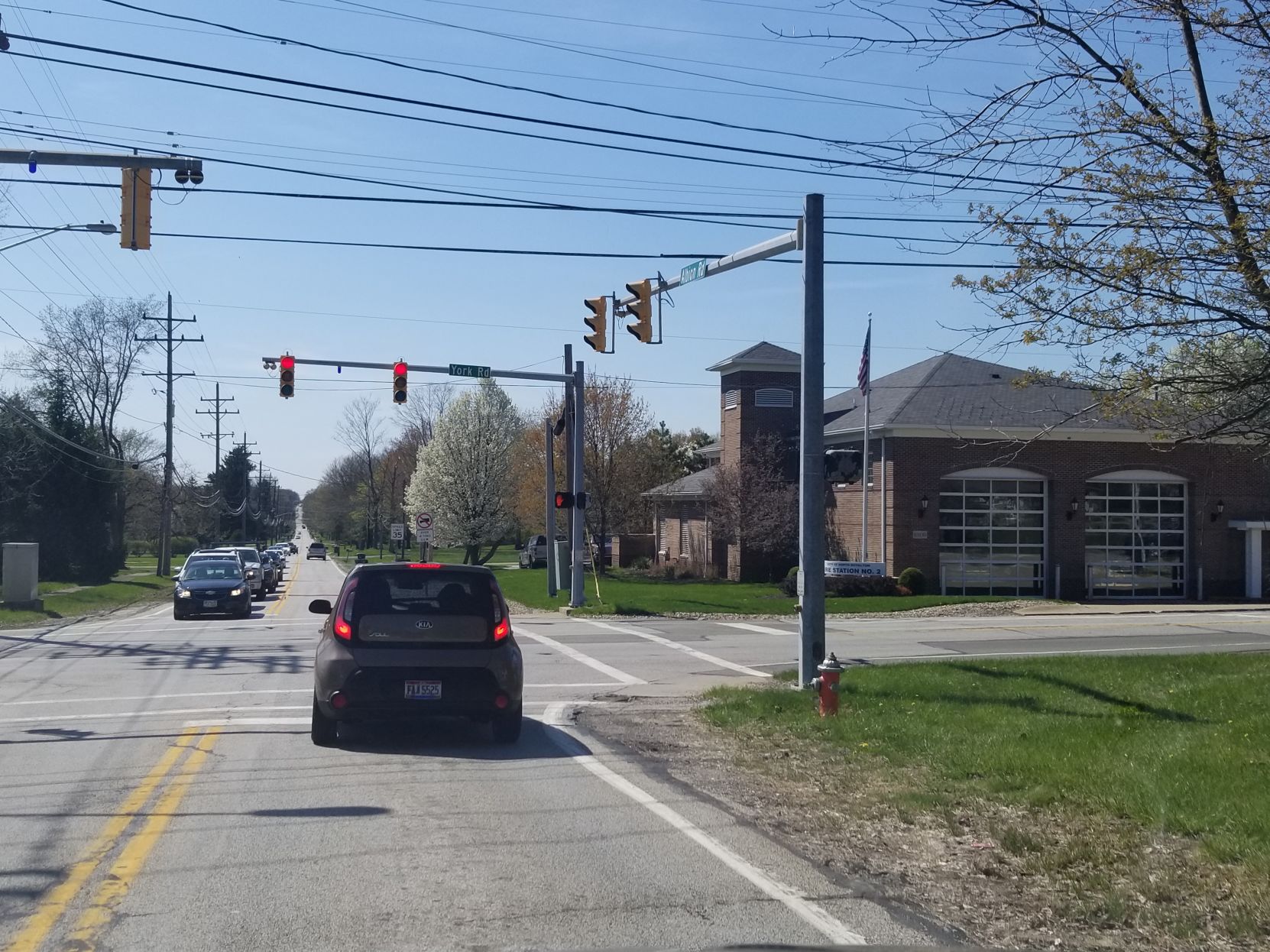 A few city leaders want to investigate the congestion at the York and Albion intersection to determine whether or not it can be or should be widened to create turning lanes to ease the traffic back-ups there. Photo by JAIME ANTON
PREVIOUS IMAGE


NORTH ROYALTON – There’s no question the York and Albion intersection can get congested at certain times of the day.

But the question some are asking is does this intersection need altered to ease some of the back-ups?

Planning Commission member Jessica Fenos, who lives off York in Ward 1, spoke on the issue at the March meeting and that discussion was continued this month by council.

Fenos said it’s more than an inconvenience with the fire department’s Station Two situated there.

“Unfortunately, not all motorists leave a clear path in front of the fire station driveway like they’re supposed to. If traffic backs up with nowhere else to go, and emergency vehicles can’t exit freely, there’s the potential for emergency response time delays,” she said.

The congestion could become compounded, she said, as motorists use alternate routes to divert from the construction along state Route 82 and later Sprague Road’s, set to begin next year.

Ward 1 Councilman John Nickell believes it’s something that needs in-depth review. York’s north and south traffic is especially troublesome, he said, which can back up to Wallings Road.

A ballpark estimate is that a widening of the York/Albion intersection could cost upwards of $2 million.

Nickell mentioned the newly instituted state gasoline tax of 10.5 cents per gallon beginning July 1 as part of a two-year transportation budget to improve roads. It is expected to generate approximately $720,000 for the next two years in funding here in North Royalton. Nickell said it’s money that could be set aside to address the intersection and others like it long term such as Royalwood and Ridge, West 130th and Whitney, and Wallings and State.

“This should be put into an intersection fund to pay for these improvements that will cost about $2 million each,” he said.

The intersection also lies in Ward 3 Councilman Dan Langshaw’s ward. He said this intersection has been discussed several times over the years but has been cost prohibitive. At one point in time, the possibility of adding a turning arrow was considered.

Council President Larry Antoskiewicz suggested revisiting this as a possible short-term solution. Antoskiewicz also reminded that traffic should ease in a few years with the addition of the new elementary school coming in 2021 and the completion of the two major road projects.

He said he would rather look at a more cost-effective approach in the meantime and make a determination once the road and school projects are completed.

“We can see if there is a way to program the traffic light and that might mean updating the electrical light to include a turning arrow so that during the peak hours we can have the traffic move more efficiently. Once the school, Sprague and 82 is done, then we can take a more in-depth look at the need for expansion at that intersection,” he said.

“I am hoping for some kind of solution of changing the timing of the lights or the police traffic unit doing some traffic control during peak hours when possible. Long term, it is my hope that after Albion Elementary School is closed for the new one that a traffic study can be done since the traffic pattern will change significantly and see if there are new options that could be pursued,” he said.

Nickell believes the need will remain.

“Adding a green altered arrow at Albion and York is a band-aid or stop gap measure, it is not a long-term solution,” he said. “We are a growing city; congested intersections are not going away.”

Mayor Bob Stefanik said the city can do a traffic study now and apply for Issue One funding, but historically, these types of applications do not score well. The city applied for Ridge and Julia in the past, he said, but was unsuccessful.

The intersection is expected to be discussed again in committee next month.