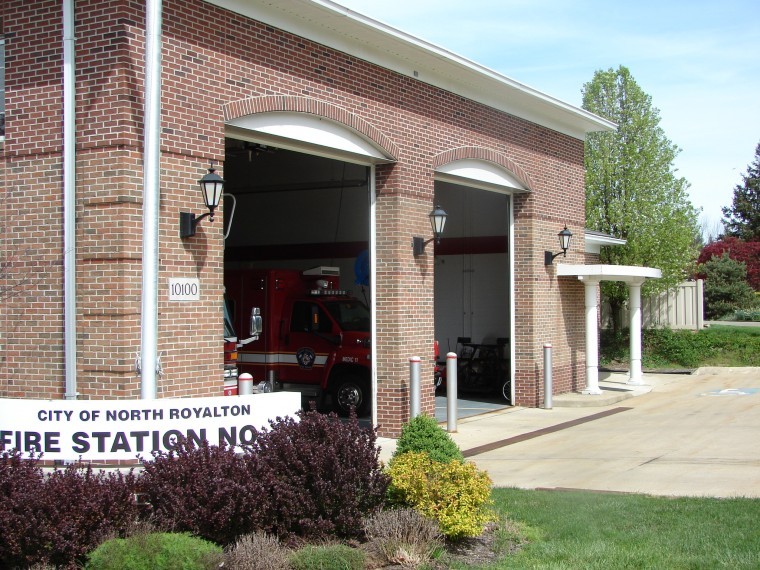 One of the many projects that will be performed as part of the energy upgrades to municipal buildings is a new roof at Fire Station Two. The projects total $3.3 million and will be repaid using the savings from reduced energy costs. File photo by JAIME ANTON
PREVIOUS IMAGE


NORTH ROYALTON – City Council has voted unanimously to move forward with the proposed energy efficiency and maintenance upgrades of its municipal buildings, projects that will be repaid with the savings realized from reduced energy costs.
Earlier this year, a comprehensive energy audit was performed by Leopardo Companies Inc., reviewing all of the municipal buildings – city hall, police and fire stations, service center, animal control, cemetery and parks maintenance buildings, as well as city-owned street and traffic lights – to identify projects that will lower energy costs.
House Bill 420, an energy conservation bill, allows municipalities to fund such upgrades by borrowing money and repaying the note with money realized in energy savings rather than upfront capital.
Leopardo recommended new LED lighting and fixture conversion at all of the city buildings, and all the traffic and 650 street lights, and it also suggested several deferred projects such as roofing at the cemetery building, fire station two, parks building and the service center, and new windows at the police station. HVAC upgrades are also suggested at several of the buildings.
These projects total close to $3 million.
Several of these upgrades are projected to cut energy costs by at least $242,000 annually. This is a guaranteed savings, so if this amount is not realized, Leopardo must make up the difference.
Over the next 20 years, this will amount to a savings of $5.2 million. Even after debt repayment and interest, the city is still guaranteed to save nearly $1.4 million through these improvements.
As far as financing goes, the city requested proposals from several banking institutions looking at both a traditional method, or lease option, and what is known as direct purchase where a bank essentially purchases the debt from the city. This type of financing is said to be more appealing because it is more flexible and could have a lower term. Four banks submitted lease proposals and eight direct purchase.
The administration and City Council opted to go with direct purchase through Zions Bank, which provided an interest rate of 2.73 percent in the amount of $2.91 million in principal with a 15-year term, which can be paid back at any time with no penalty. The city will put $400,000 down from mostly fire capital reserve funds.
Finance Director Eric Dean said he felt very comfortable with this approach.
“We were happy to get a lower interest rate. This loan is almost $200,000 lower in interest costs below our projection over the life of the bond,” he said. “And the flexibility of repayment at any time gives us a lot of opportunities to refinance it if rates are lower or if the project comes in under budget.”
The work will be performed through Leopardo, which has its own subcontractors, and the majority of work is expected to be completed by the end of the year.
Mayor Bob Stefanik said this is a solid investment in the city’s municipal buildings and likened it to residents addressing maintenance issues with their own homes.
“This is an opportunity to take care of several maintenance issues,” he said. “We’re utilizing H.B. 420 to upgrade our municipal facilities and paying for it through the cost savings that will be realized through the energy efficiency of those upgrades. We don’t see any new construction for facilities in the near future.”
City Council was unanimously in favor of these projects.
“It’s a necessary maintenance project, and I am pleased it is moving forward,” said Ward 5 Councilwoman Cheryl Hannan.