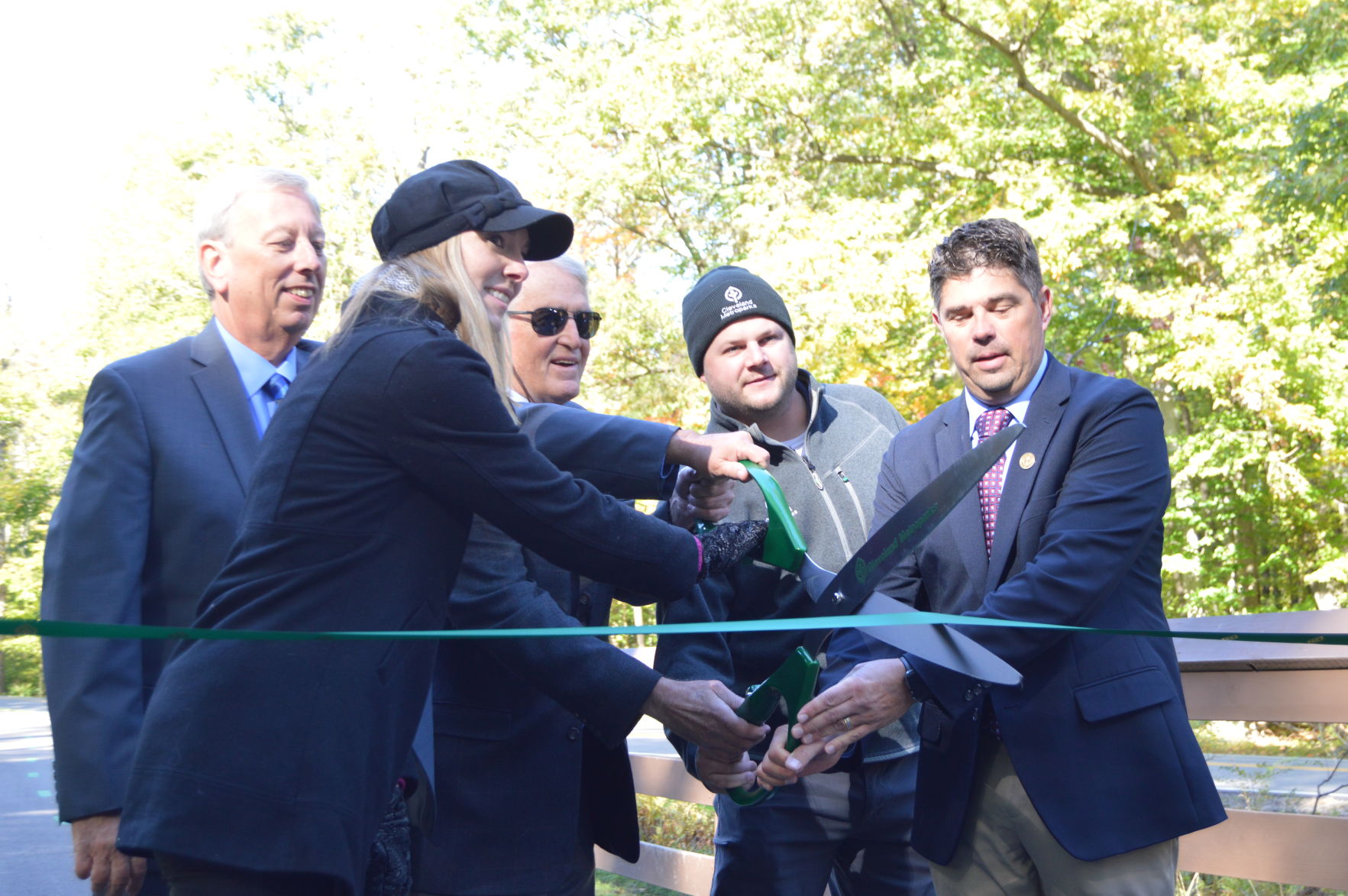 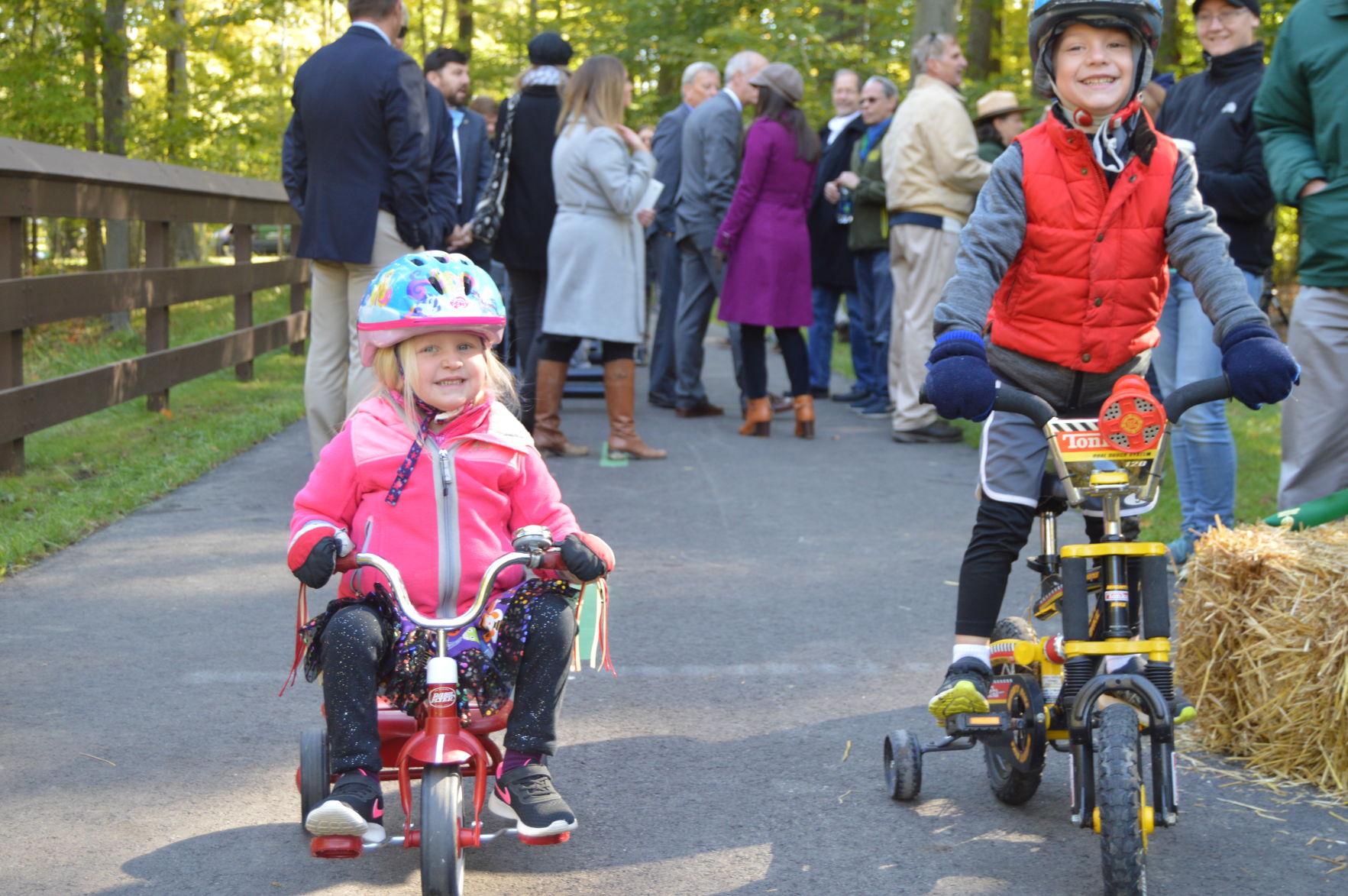 Siblings Grace and Caleb Iafigliola, of Olmsted Falls, were the first bikers to use the trail after it was formally opened to the public Oct. 22. 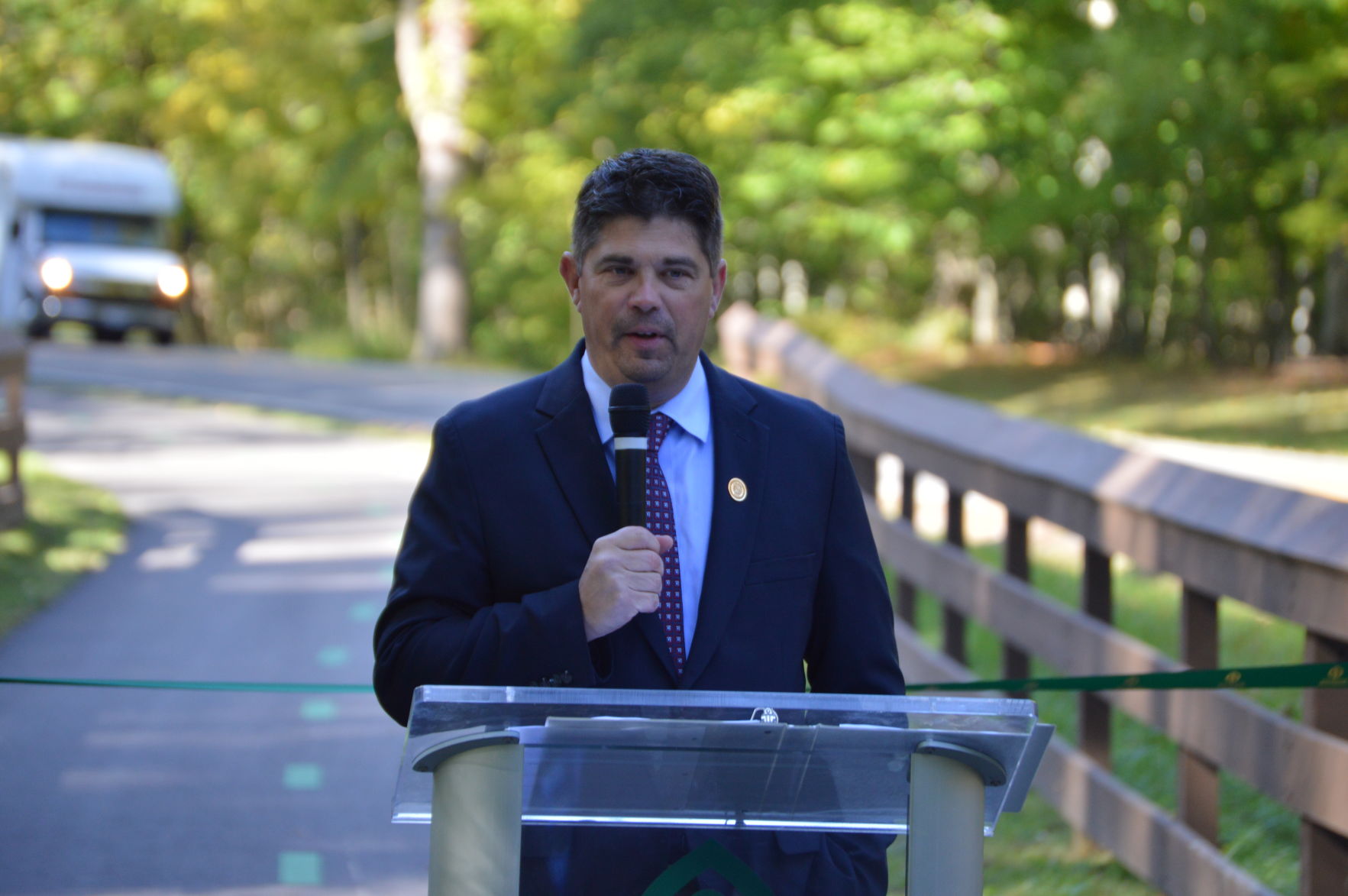 Cleveland Metroparks CEO Brian Zimmerman opened the ceremony, sharing how pleased the park is to finally complete this missing link of the Emerald Necklace. 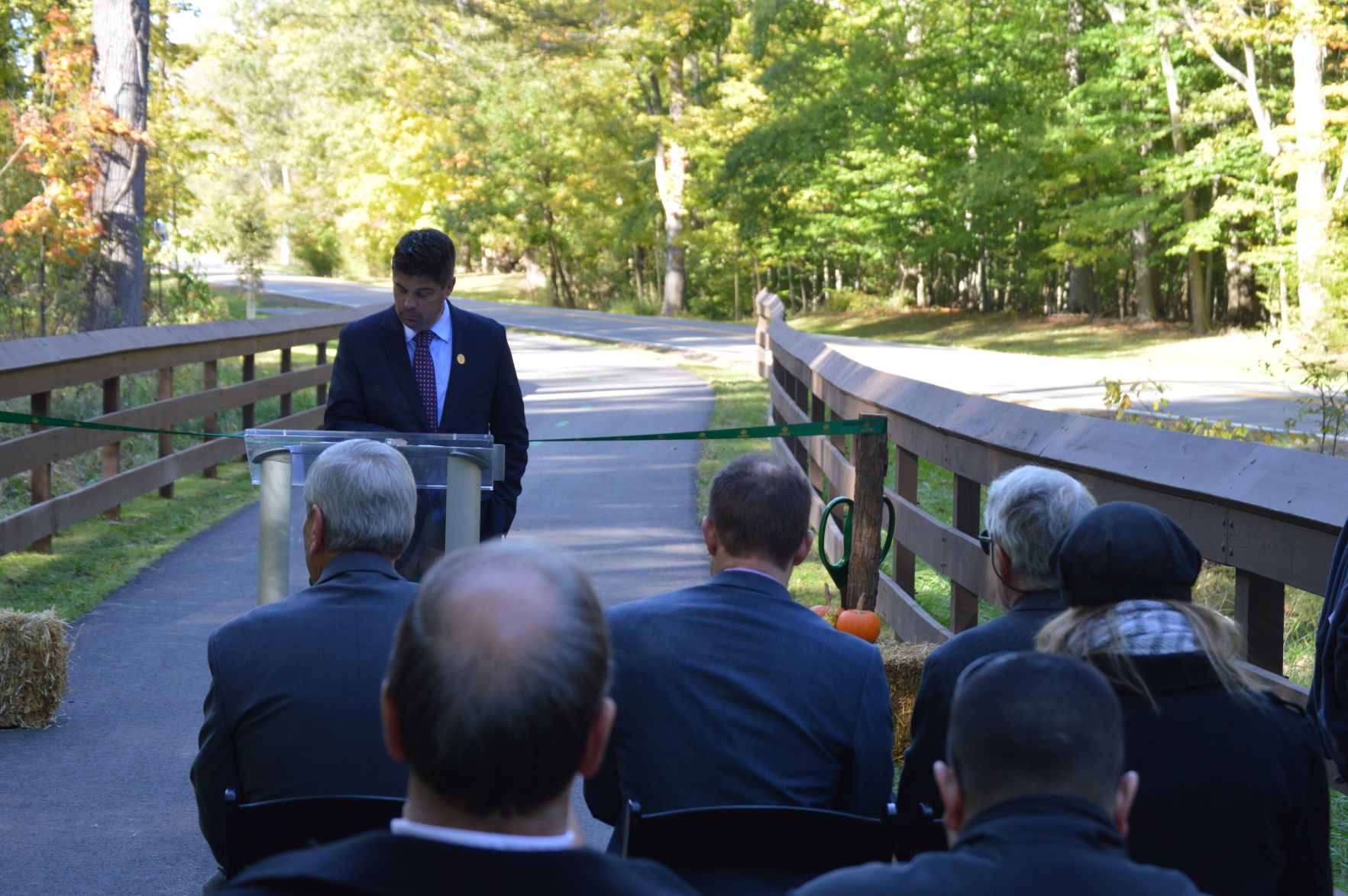 The grand opening of the all-purpose trail was hosted right on the path with dozens attending the occasion. 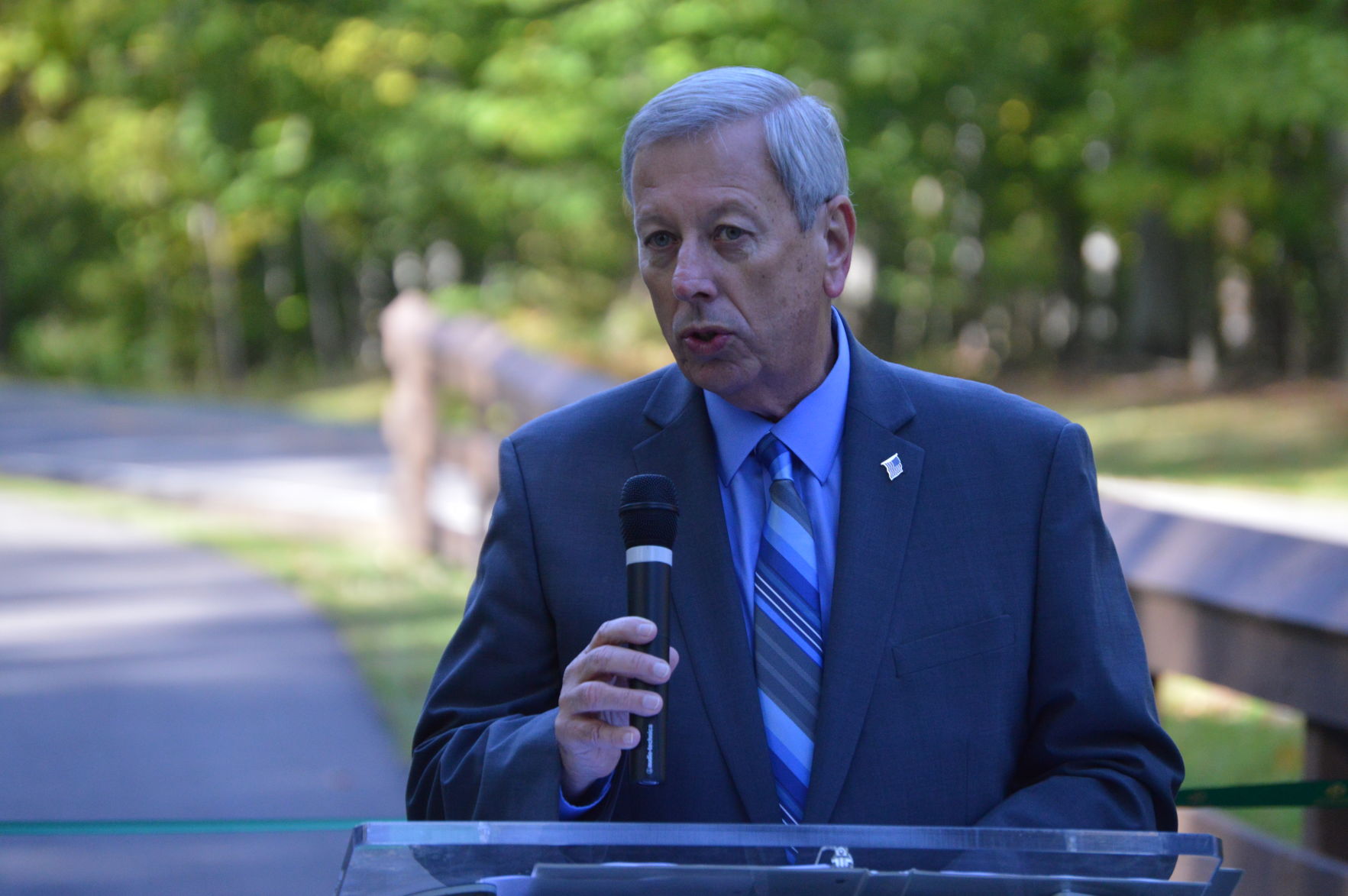 North Royalton Mayor Bob Stefanik said great things happen when communities and entities work together, and the all-purpose trail completion is a shining example of that.
PREVIOUS IMAGE


BROADVIEW HEIGHTS – A shining gem and long missing link of the coveted Emerald Necklace was presented to the community to much fanfare Oct. 22.

Several local dignitaries from the Cleveland Metroparks and the city of North Royalton, media outlets, as well as a few residents attended the grand opening of the Metroparks’ Valley Parkway Connector Trail at the entrance to Seneca Golf Course, a section that closes a six-mile gap between Ridge and Brecksville roads along the all-purpose trail network.

This project has been in the works nearly 10 years with an involved process through a Northeast Ohio Areawide Coordinating Agency’s Transportation for Livable Communities Initiative planning grant. And its completion, Metroparks CEO Brian Zimmerman said, allows bicyclists and pedestrians to utilize 33 consecutive miles of connected, shared-use trials. He called this project a critical piece of bringing park founder William Stinchcomb’s vision of an interconnected Emerald Necklace to fruition, and he thanked all those who worked together to blaze this trail.

“The trail not only links our reservations, the Ohio and Erie Towpath and the Cuyahoga Valley National Park, but also now serves as a local connection between neighborhoods, community resources and employers,” he said. “I want to thank NOACA, the Ohio Department of Natural Resources and the cities of Brecksville, Broadview Heights and North Royalton for their support of this important connection.”

It was a long time coming.

“What a day … it is an emotional experience,” Dan Moore, president of the Board of Park Commissioners, told the crowd. “The amazing thing is the Metroparks is able to galvanize its relationships to pull things off like this.”

North Royalton Mayor Bob Stefanik said too this is a shining example of how entities working together can accomplish much.

Dignitaries gathered to cut the ribbon.

“The trail is open, thank you!” Zimmerman said, holding the giant scissors.

Bob Burichin, project manager, Strongsville resident and grandson of the late Strongsville Mayor Walter Ehrnfelt Jr., said this trail means a great deal to him, especially having grown up with the parks.

“I spent three years out here,” he said, looking at the accomplishment. “I’ll absolutely use this trail. I’m proud of the project and happy to open it to the public.”

North Royalton resident Kathy King lives near the trail and utilizes both the all-purpose and bridle paths regularly and said it truly is a gem.

“We are always out on the trail whether dog, horse or walking,” she said. “It’s a great asset to connect people to healthy living.”

The $4.75 million project was supported by Clean Ohio Trails Fund grants through the ODNR; a federal Congestion Mitigation and Air Quality improvement grant through NOACA; local funding from the cities of Brecksville, Broadview Heights and North Royalton; and the Cleveland Metroparks’ capital funds.