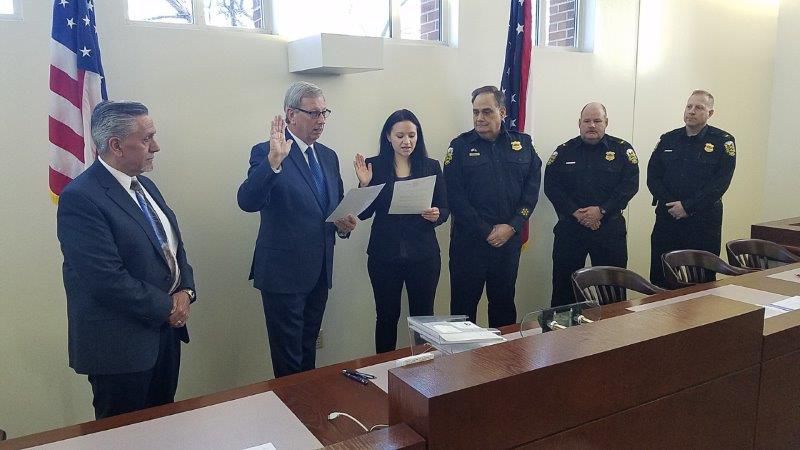 Mayor Bob Stefanik swears in Lexie Bell as the newest police officer Jan. 4. Her first day was Jan. 7. Photo courtesy of the NRPD 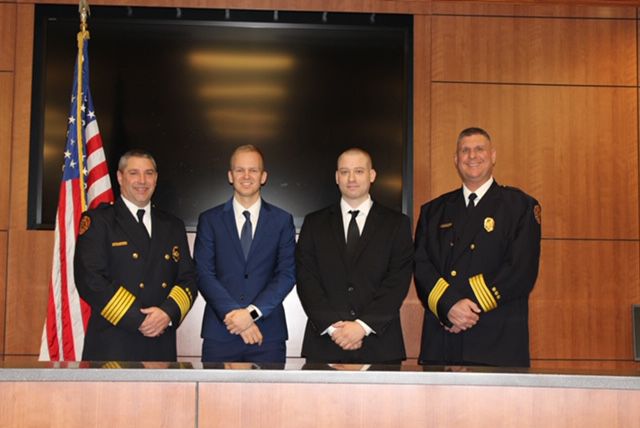 Fire Chief Bob Chegan (far left) and Assistant Fire Chief Tom Habak (far right) pose for a photo with the newest recruits Yaroslav Yavorski and Isaac Siman after they were sworn in Jan. 4. Photo courtesy of the NRFD
PREVIOUS IMAGE


NORTH ROYALTON – One new police officer and two firemen have joined the ranks.

Bell is a U.S. Marine Corps veteran and served with the Cleveland Police Department for a year. Police Chief Ken Bilinovich said she comes highly qualified with a master’s degree in criminal justice from the University of Cincinnati. She also scored highly on the patrolman eligibility list, he added.

Bell is the third woman to join the force. Her first day was Jan. 7 and she will undergo 12 weeks of field training before hitting the streets solo.

“She is very well qualified, highly educated and well trained already as she comes to us. We’re looking forward to her joining our department and serving the city and our residents of North Royalton for many years to come,” the chief said.

Bell said she is looking forward to the opportunity.

“I’m excited to see what North Royalton has to offer. I know it’s a good community, and I am looking forward to being of service,” she said.

Siman and Yavorski also began their careers with the city Jan. 7 and will undergo a few months of training.

Siman has experience as a volunteer for Chatham Township for seven years and worked for Lifecare in Elyria.

Yavorski has experience at Brunswick Hills and Seven Hills.

“I’m looking forward to working with all the great guys we have up here, No. 1, and meeting all of them,” he said.

Fire Chief Bob Chegan said his goal is to hire high-quality people and Siman and Yavorski fit the bill.

“The quality of service directly relates to the quality of responders. This can’t be accomplished without the dedicated members of this department. These two ended up high on our list to fill the next two spots of dedicated civil servants,” Chegan said.

Stefanik said the administration’s No. 1 priority is its commitment to safety forces so maintaining the current staffing levels is imperative.

“While we may be able to reduce costs in other areas of the city, it’s imperative we maintain our top-notch safety forces,” the mayor said.