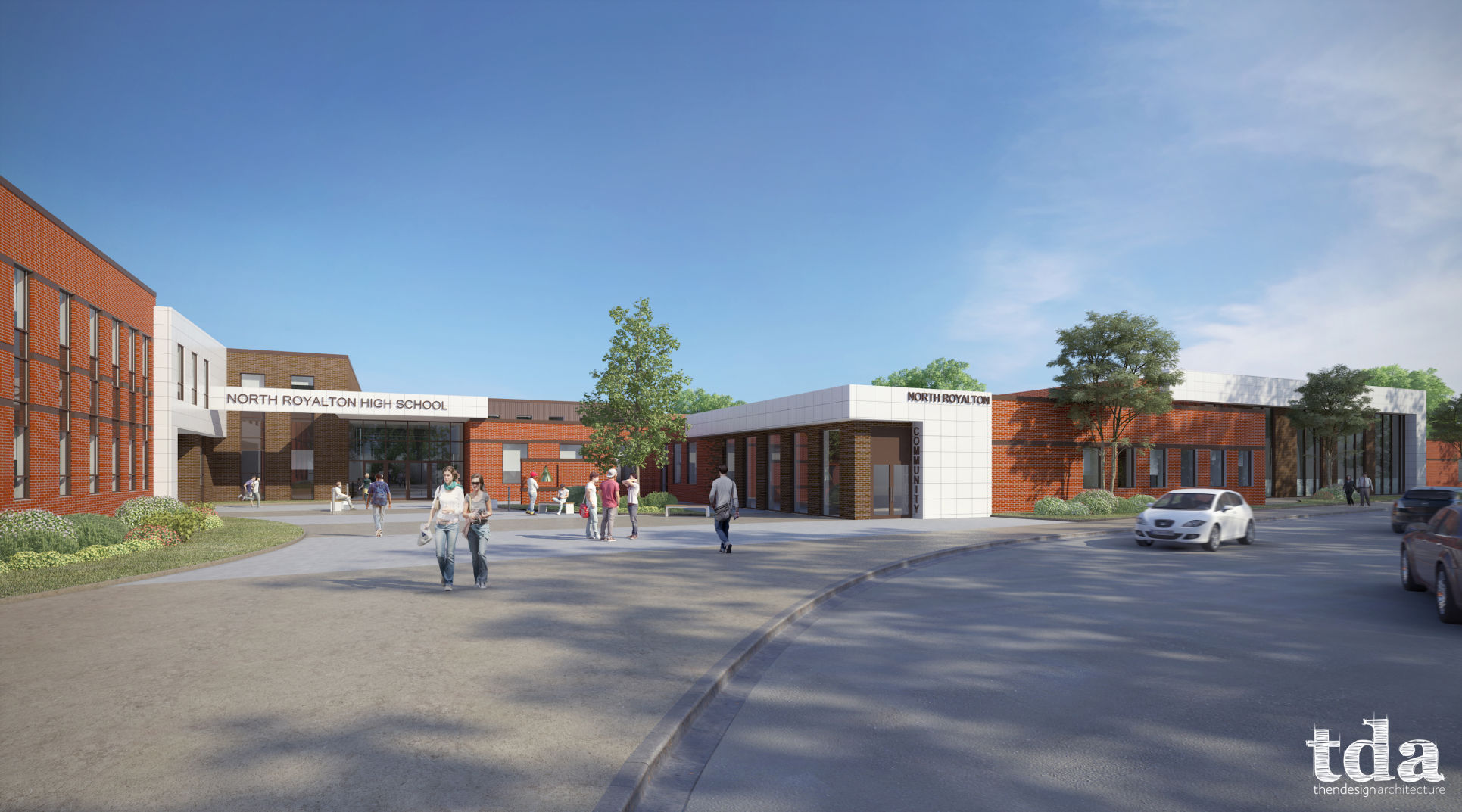 This image depicts the exterior, conceptual design of the North Royalton High School. The two-story addition to the left is coming off the Performing Arts Center into the current parking lot. This new entrance will open into what is now the media center. Construction will begin sometime around spring break with a groundbreaking for the addition. Image courtesy of TDA
PREVIOUS IMAGE


NORTH ROYALTON – The commencement of the actual construction of the two-story addition to the high school building is just weeks away, so the school district will be hosting a community meeting to share details of the project with residents.

The community meeting will be hosted at 7 p.m. Feb. 26 in the high school’s center of performing art at 14713 Ridge Road. During the meeting Superintendent Greg Gurka will give his annual State of the Schools address as well as an in-depth update on building projects.

A brief update was given during the school board’s Dec. 10 board meeting, where the school board approved the guaranteed maximum price for the high school’s brick and mortar construction, approximately $40 million.

The district will be going out to bid for the school Jan. 7. Fencing will be going up over spring break, March 22-31, and construction will begin around this time. A formal groundbreaking ceremony will be conducted, the exact date will be shared during the community meeting.

So far the bus loop has been completed ahead of construction. This access loop will allow the district to maintain traffic flow patterns during the school year while the building addition is being constructed.

Through its relationship with the city, North Royalton will allow students to park at the City Green parking lot and Memorial Park lot during the duration of the project, as the addition is being built where the student lot is now at the high school. Buses will shuttle students from those alternative lots, and police will be patrolling those sites.

As far as the middle school upgrades, roof repairs and HVAC work on gym units are also complete.

The North Royalton Elementary School project is still on hold awaiting necessary permits from the Ohio EPA. It was announced earlier this year that this project could be delayed a year due to growth of the wetlands on the site beyond half an acre, requiring the Ohio EPA permit which can take 180-365 days to obtain. This could push the school’s completion in August 2021 rather than August 2020 as was originally planned.

The district is, however, moving forward with the final stages of the building’s design.

Gurka said infrastructure upgrades are about to become much more visible.

“It’s becoming real. This is exciting, and it’s going to be awesome to see the fruits of our labor finally starting to take shape,” he said. “I encourage everyone to come to the meeting Feb. 26 to not only get an update on the state of the schools in general, but the construction process.”