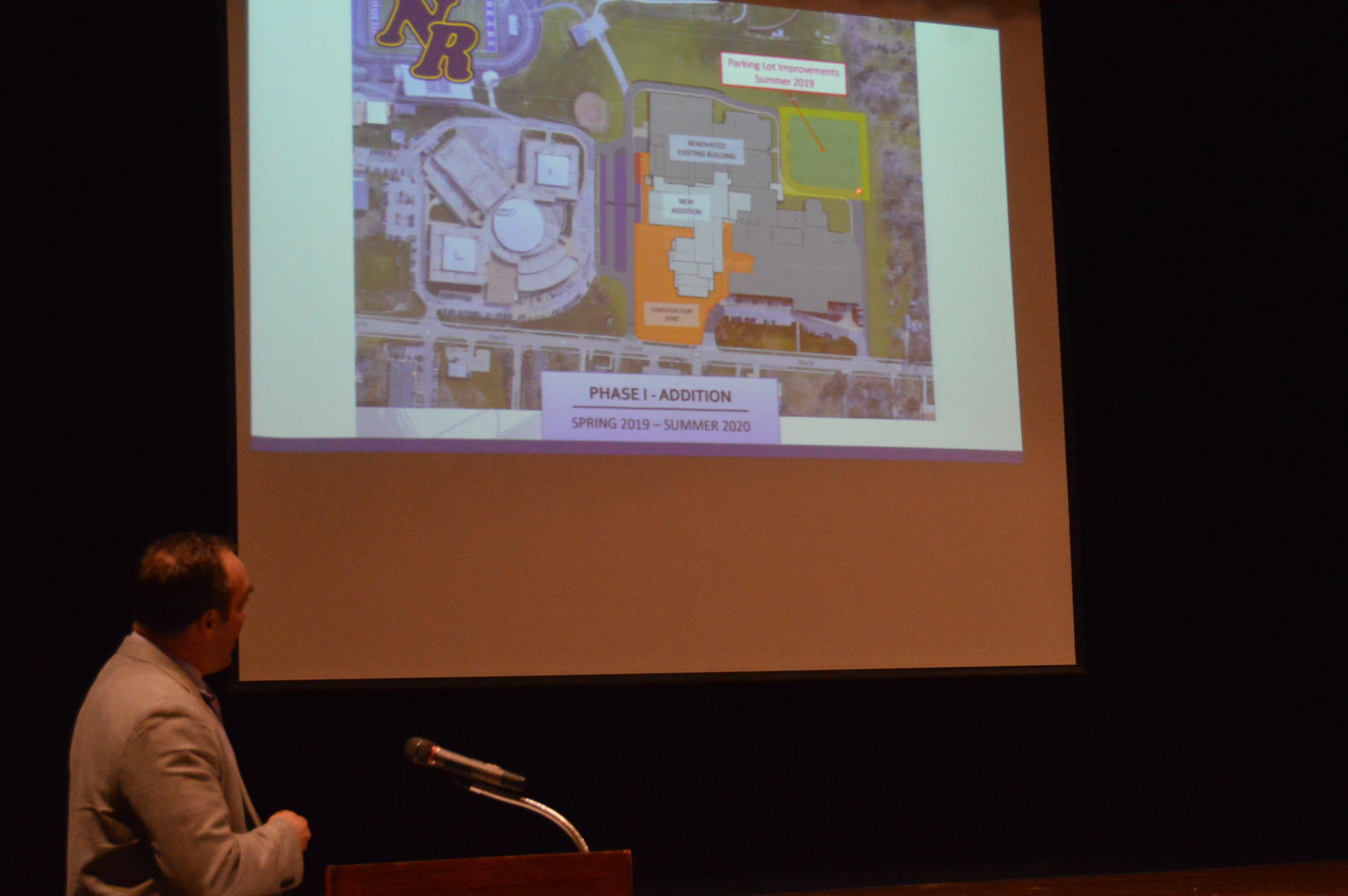 Jeff Adams, project manager for Hammond Construction, shared with the community the timeline of the high school addition and renovations, which will be performed in three phases beginning next month and wrapping up at the end of 2021. Photo by JAIME ANTON

This rendering shows what the North Royalton High School will look like once it is fully complete at the end of 2021. Rendering courtesy of TDA 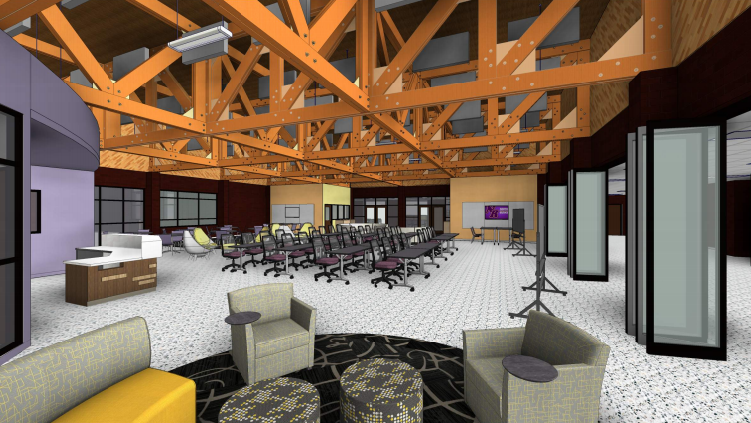 This rendering shared at during the school district’s construction update last week shows how the cafeteria in the Performing Arts Center will be completely transformed, recognizable only by its signature wood beams. The goal is to make the entire building, even renovated portions, look and feel brand new rather than simply touched up, school officials said. Rendering courtesy of TDA
PREVIOUS IMAGE


NORTH ROYALTON – For years, the building infrastructure projects have been debated and discussed and now finally the North Royalton School District is on the cusp of construction with a formal groundbreaking ceremony planned April 6 to commemorate the start of the North Royalton High School project.

The date was formally announced during a community meeting last week that shared the details and timeline for the project, which includes a brand new, two-story addition that will extend off the Performing Arts Center and into what is now the student parking lot toward Ridge Road as well as extensive renovations throughout and the demolition of the 1950s section of the building, the westernmost section where the Community Room is now.

The goal is for the entire building to look brand new once completed Superintendent Greg Gurka said.

“We are ready to begin construction in a little less than a month. The goal is to make the entire building look and feel as though it is brand new and function as such,” he said, showing the crowd a rendering of the cafeteria, near the Performing Arts Center, completely transformed and recognizable only by its signature wood beams. “We want this to look and feel brand new and not like a touch-up remodel.”

During spring break, March 22-31, construction fencing will be installed around the work site of the addition in the student parking lot. The groundbreaking ceremony is planned for 11 a.m. April 6 and the community is invited to attend.

The high school projects are divided into three phases.

The bulk of Phase One is the 100,000-square-feet addition expected to take a little less than 18 months to complete, finishing up around August 2020. This summer improvements will also be made to the teacher parking lot in the back of the building as well as the Performing Arts Center and Gym 1.

Jeff Adams, project manager for Hammond, said renovations will be performed in 30,000-40,000-square-foot sections that will each take roughly five months to complete.

Phase Three, which will begin in the spring of 2021 and finish up in the fall that year, will be the demolition of the ‘50s section of the building and the creation of a new student parking lot where that section once stood.

Adams assured the finished product will be a showstopper.

Traffic flows at both the high school and middle school will change beginning April 1. Parents should refer to the district’s website at northroyaltonsd.org for details.

Because Heritage Hallway will no longer be accessible, entry points into the building will change too.

As of April 1, visitors to the high school will enter through far northeast side of the building by the Performing Arts Center doors. The main office will be moved to the community room over the summer, so beginning in August that will become the new point of entry.

Through its partnership with the city, the schools saved $200,000 by avoiding the need for temporary parking spaces, Gurka said, after meeting with the mayor who agreed to allow students to park at both city hall and the City Green during construction. Buses will shuttle those students from there.

At the middle school, a new secure entrance will be constructed over the summer.

As for the elementary, construction there is expected to be completed by August 2021, a delay caused by the need for additional permitting through the EPA due to wetland growth. Future community meetings will likely be planned to discuss this project.

Gurka said with construction so close, it’s almost surreal and hard to believe that two years ago the district was deciding which programs to cut to fund upgrades and now it is on the cusp of providing cutting edge services in updated buildings.

“This couldn’t happen without the support of the community,” he said.