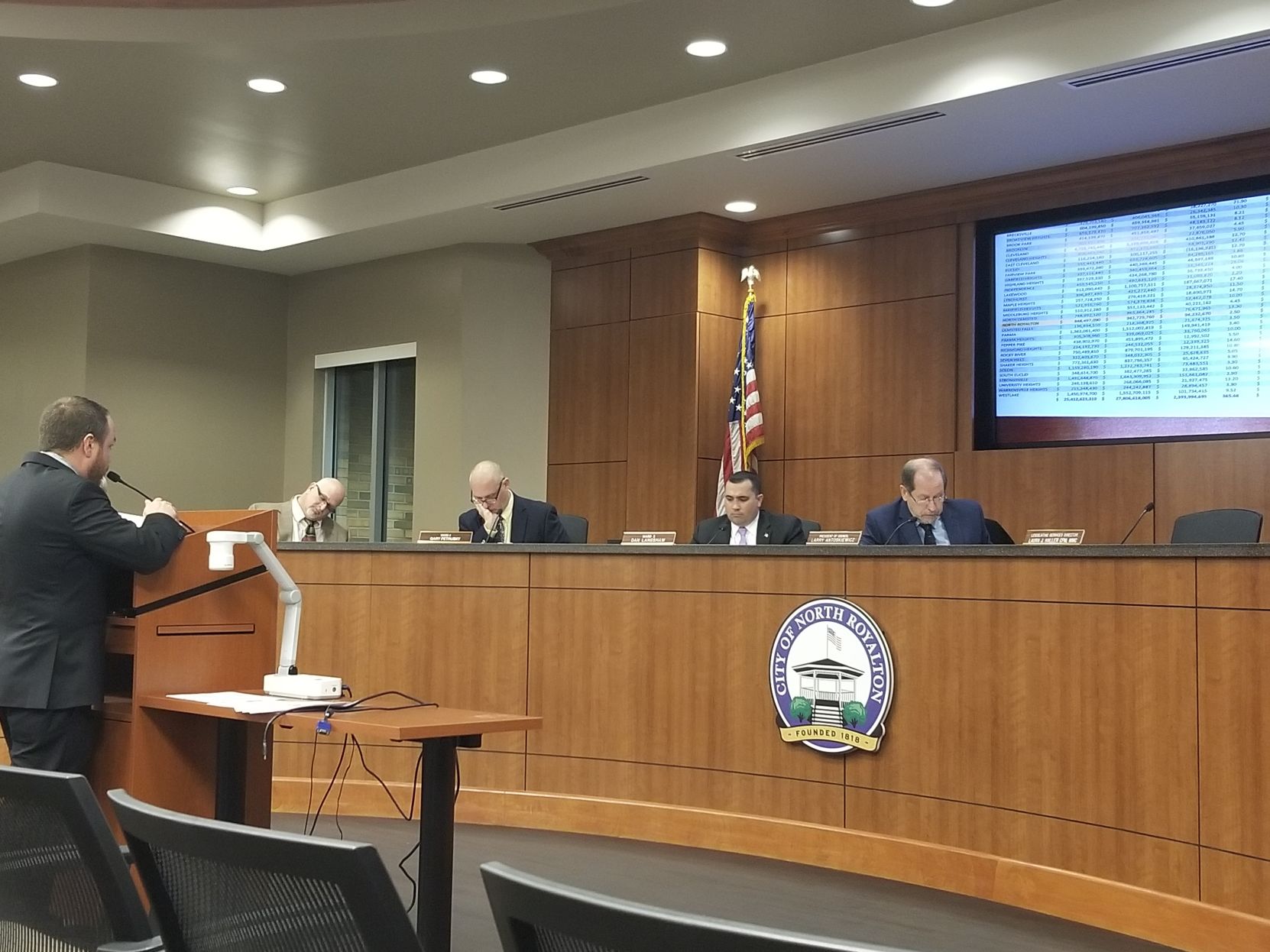 Finance Director Eric Dean presented City Council with an overview of the proposed 2019 budget Nov. 20. Council is expected to vote on the budget Dec. 4. Photo by JAIME ANTON
PREVIOUS IMAGE


NORTH ROYALTON – Finance Director Eric Dean presented city council with an overview of the 2019 proposed budget, which has been described as a “bare bones” budget.

City council has been reviewing the 2019 budget the past few weeks and is excepted to pass it on third reading during its upcoming meeting Dec. 4.

The major capital expenses of the general fund include: $76,100 in traffic light repairs; $50,000 in phone system and server upgrades at the police department; $10,000 for a new mower for parks and rec; $26,000 in new flooring and entryway upgrades and new computers at the building department; and $30,000 for a new server at city hall.

The city’s continuous police levies will fund four new police cruisers totaling $126,700; as well as $63,000 in equipment for new vehicles and funding for the new K-9 unit; and $15,000 to repair jail flooring.

And $1.2 million has been preliminarily earmarked for road reconstruction, including the repaving of state Route 82. As it typically does, if collections come in higher than anticipated, council can allocate more toward road repairs later in the year.

The city will end 2018 slightly down from last year’s collects by approximately $90,000, at approximately $15.85 million total. Dean has budgeted a slight decrease in 2019 to err on the side of caution.

“We are being cautious. I do expect us to be slightly down (in 2019) compared to this year,” he said.

He did note that, year to date, there has been $5.85 million in state funding cuts, approximately $900,000 a year, through cuts to local government funding and the elimination of the estate tax.

Most agree it is a conservative budget.

“This budget is probably as bare bones as we have had in all the years we’ve been doing this,” Council President Larry Antoskiewicz, who chairs finance, said. “It’s good to see a nice transition from replacing equipment to now being able to spend more on roads.”

Ward 6 Councilman Dan Kasaris said he appreciates the realism in this budget and past ones in terms of income tax collections.

“We have to be realistic that we are not going to continue to have increases in our revenues on an annual basis, and the mayor and the finance director recognize that and properly adjusted not only our income levels down but our spending levels as well. In North Royalton, we do not overspend, we do not live above our means,” he said.

“Kudos to Finance Director Eric Dean and our department heads for another ‘lean and mean’ budget. The budget is very similar to last year’s budget that served us so well,” she said.

Ward 3 Councilman Dan Langshaw said what stands out to him is the state cuts.

“This directly impacts our budget and our ability to operate as a city. I have already reached out to our lawmakers in the General Assembly about the continued need to restore local government funding, and I hope to testify down at the statehouse in the new year when the next state biennium budget is introduced.”